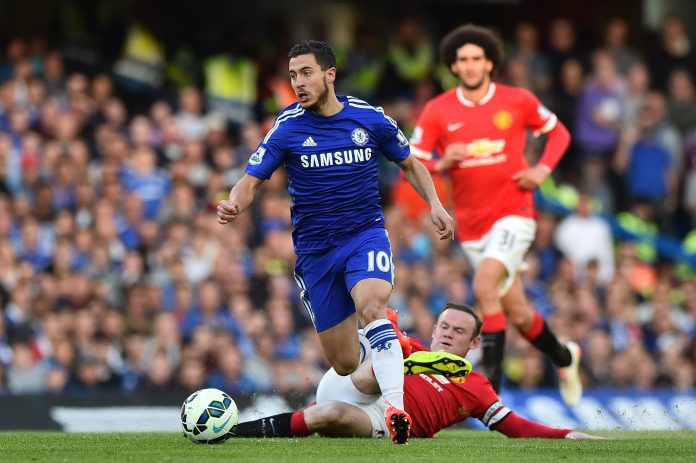 Chelsea currently sits atop the Premier League with a commanding double-digital point lead over second place Arsenal. A major influence on the dominating performance of Chelsea this season has been the play of their standout midfielder, Eden Hazard. The 24-year-old has notched 18 goals, 13 of which were in league play, and 10 assists for Chelsea this season earning him nomination for both the PFA Player and Young Player of the Year awards which will be awarded Sunday.

Chelsea signed the Belgian forward to a five-and-a-half year contract in February in hopes of securing the budding superstar for the future but Jose Mourinho and the club have reason to worry after Zinedine Zidane’s comments following Monday night’s Match Against Poverty in Saint-Etienne.

Speaking with a reporter from Fifa.com, Zidane explained he has had his eye on Hazard; “There are players I keep an eye on and who I like a lot, like Lionel Messi and Cristiano Ronaldo, of course. They’re fantastic players, but I like Eden Hazard a lot too.” Although Hazard has yet to reach the overall success of Messi and Ronaldo, his youth and talent provide an opportunity to reach their level of dominance in the next few years.

The Real Madrid legend continued his high praise for the young Hazard explaining he believes the 24-year-old’s stellar performance this season is a big reason for Chelsea’s current success; “I enjoy everything he does on the pitch. I like the way he carries himself, that decisive streak in him and the fact that he’s improving every year. He can still get better too. I think he’s a big reason why Chelsea are on top of the table.”

Zidane is currently in charge of the Real Madrid Castilla team and continues to be heavily involved with Real Madrid’s senior squad. Zidane’s public praise of Hazard comes as no surprise as Real Madrid and Zidane used similar tactics during the courting of Gareth Bale.

Chelsea was able to secure Hazard’s major contract earlier this year which should give them confidence that the Hazard storyline won’t follow the same plot as the Bale story but, unfortunately for the Premier League’s top team, there is one major aspect of the Zidane comments that differ from the Bale situation; Hazard idolizes the former Real Madrid superstar.

It is public knowledge that Hazard has idolized Zidane since his youth. Hazard begged former Chelsea star Juan Mata to let him wear the number 10 to show his admiration for the French legend but to no avail as Mata insisted on wearing the number. Hazard settled on number 17 till Mata was shipped off to rival Manchester United last year freeing up the coveted number. Hazard quickly pounced on the opportunity to dawn the number his role model once wore; “I’ve always liked the number 10, because it is was worn by Zidane. He was my role model, I’ve always wanted to play like him.”

Chelsea might have the opportunity to breathe a sigh of relief as many believe Real Madrid won’t immediately pursue Hazard after the signing of his major contract but it is obvious the superstar is in the long-term plans of the Spanish club. Though, there are also those who believe Real’s pursuit of the Belgian forward will begin as a soon as this summer and the Zidane comments are only adding fuel to that fire.

Hazard scored the only goal in Chelsea’s victory over Manchester United last weekend which all but secured Chelsea’s first Premier League title since 2010. Chelsea faces the only team within real striking distance of the league title, Arsenal, on Sunday and are heavily favored against the Gunners as per Gambling.com affiliates. Chelsea might not be fighting off Premier League powerhouses as they approach the end of the season with a commanding lead in the league but are finding themselves fighting off foreign suitors of their superstar. Luckily for Chelsea, if they are able to keep the stud their team is set for years to come but if they fail to fend off suitors, the English squad will certainly get an enormous fee in return providing opportunity to sign more budding starts as they did with Hazard back in 2012.