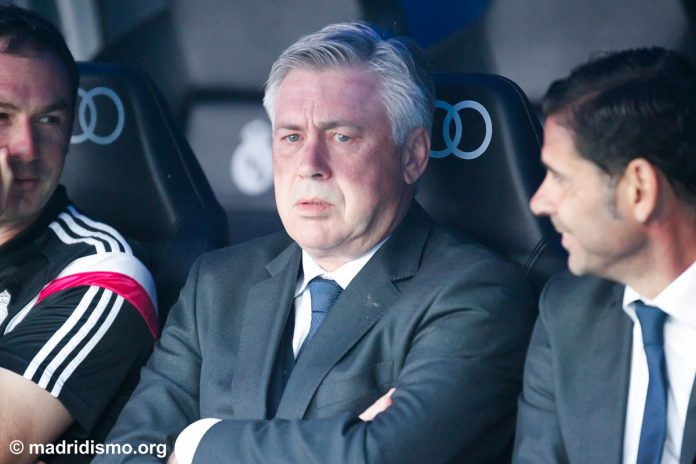 Real Madrid boss Carlo Ancelotti will not throw the towel in on La Liga until it is mathematically impossible to win the title.

Madrid trail leaders Barcelona by four points with just six to play for going into their penultimate match of the season at Espanyol on Sunday.

Barcelona can clinch La Liga with victory at Atletico Madrid or by equalling the result Madrid claim in Catalonia but Ancelotti says he side will give everything to claim all three points at the Cornella against an in-form Espanyol side.

“We know it is an important match and we need to bounce back from the result on Wednesday,” Ancelotti told Realmadrid.com. “It is going to be an intense and difficult match, but the have been training well and we’re completely focused. We want to give it our all in the next two games to fight for the La Liga title until it’s no longer possible mathematicall.y.”

“Every team is fighting for something at the end of the season. Espanyol are fighting to finish as high up the table as possible, so it will be an intense and difficult test. Our objective has to continue being making our supporters happy with the team’s level of commitment and showing them that we’ll give it our all for them. We’ll have that same attitude tomorrow. We’ll show that we’ve reacted well to the setback and that our level of professionalism will be as high as ever.”

Ancelotti said Keylor Navas will get a chance to play in one of the two remaining matches but did not say whether it would be this weekend or against Getafe at the Bernabeu in the last match of the season.