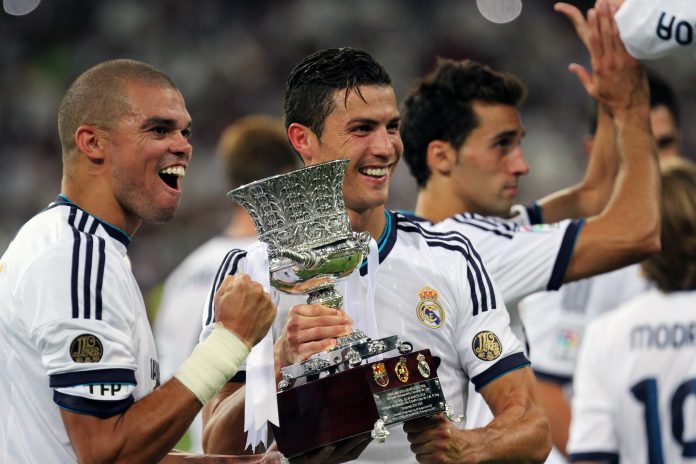 It was the 26th of May and we had just won a third Champions League title in a row. No one has ever won 2 in a row (in the current format) and we had just won the third and 4 in 5 years. This was an amazing feat and it will be many years before it will be repeated. In fact, 4 in 5 years, who knows if it will ever be repeated? This was just an absolutely incredible moment of glory for the team and for the fans.

Then Cristiano comes to the microphones and says, “It was great playing for Real Madrid.” What the f@##? Excuse my language but what the f@##? We have just won a third title in a row and instead of celebrating and being happy he drops a bombshell about leaving the club, effectively spoiling the party for everyone.

Maybe after winning 4 out 5 Champions League titles Cristiano is starting to believe it’s easy, that he can keep winning more. Maybe it’s no longer exciting for him to be the Champion of Europe? Or maybe since he wasn’t the star of the final he had to grab the spotlight from Bale, who scored an incredible overhead volley and a shot from long range to put the match away. Yes, Bale was in fact the man of the match, and maybe this was too much for Cristiano to bear. I am all for Cristiano scoring a large percentage of the goals, in fact I’m rooting for it, but if he can’t be a team player then he does need to find another team.

We take Cristiano, the good with the bad, but this time he may have taken a step too far. Amazingly the Bernabeu forgave him as they chanted his name along with “Cristiano quédate” (Cristiano stay) at the celebration in the stadium. I’ve always said that Cristiano’s drive, arrogance and insecurities can’t be separated. His need to feel loved and appreciated, it’s all part of who he is, something that makes him great and at the same time makes him difficult.

Up until now I have always stood by him, even when has been wrong. If what the newspapers report is true and Florentino went back on his word of raising his salary then maybe he is right in wanting to leave. I really believe that Cristiano has earned a salary of 30 million based on what he has done for Madrid, not based on what he will do now at the age of 33. I think he will still score a lot of goals for the next 2 or 3 years, but let’s face it, it won’t be enough to earn that salary.

So I have no issue with Cristiano wanting to be recognized with higher pay and something closer to what Messi and Neymar earn (although they are younger and have more good years ahead). What I don’t find acceptable is the manner in which he blurted out his frustration. It always has to be about him. He always has to be the star.

Now would be a good time to sell Cristiano for a good offer like the one Juventus has reportedly put on the table. But in my humble opinion, one of the 2 best players in the history of Real Madrid should retire at Real Madrid.

Make no doubt, we will miss him when he’s gone but he will miss us too. Cristiano would not have won 4 Champions League titles (while at Real Madrid) without the players around him and while Juventus is a great team it’s not Real Madrid.