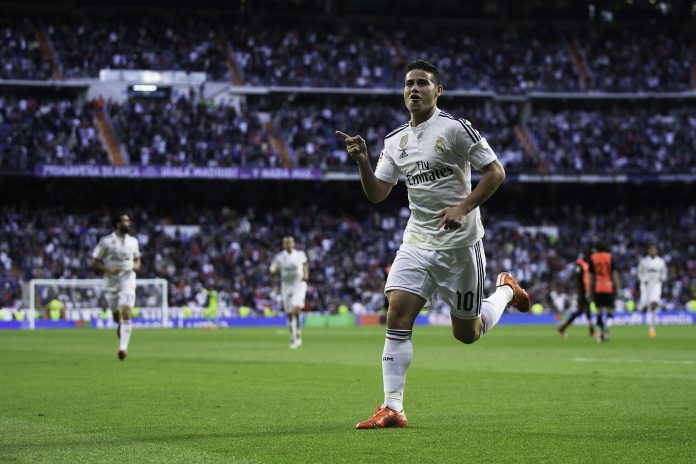 Will Real Madrid make it 4 in a row in Europe this season? Use the Unibet promo code 2019 for betting on Real’s UCL chances.

It’s quite apt that four years on from a starring role in the 2014 World Cup, James Rodríguez is once again being linked with a move to Real Madrid.

Back then it was a near-€90 million move to the Spanish capital from Monaco. Now it could be a premature return to the Bernabéu from a two-year loan deal with German giants Bayern Munich.

The Colombian is a year in to a two-year loan stint in the Bundesliga after falling out of favour under previous Blancos boss Zinedine Zidane. But with Zidane gone and Julen Lopetegui in, a return to Madrid seems close.

That potential move has only been helped by Cristiano Ronaldo’s departure to Juventus. Florentino Perez is back looking for poster boy of the club, someone who not only shines on the pitch and gets fans through the turnstiles, but someone who will sell shirts and merchandise. James ticked all the boxes four years ago and he ticks all the boxes now.

James fuelled speculation with an interview on Spanish TV show ‘El Chiringuito’ recently, saying: “Whenever I can, I always watch the team’s matches. I trained well at Real but every coach has their preferences and you must respect them.

“Football is like that, sometimes you are where you want to be and other times you are not, and then you come back…”.

James has already admitted it was “his dream” to play for Madrid and that his departure was down to Zidane’s preferences. The French coach was no pushover for Perez but now the Madrid president could look to push Lopetegui to play Gareth Bale and James, two of his own signings, at all costs as he did with Carlo Ancelotti.

The Colombian’s return would be like a new signing for the European champions and would avoid splashing huge sums of cash on bringing in a host of new superstars in light of Cristiano’s departure. Perez may have made a name for himself by signing ‘Galacticos’ but in recent seasons he’s been looking to make money, too.

James says he is happy at Bayern but a return to Madrid for a second chance would surely prove too much too turn down. With Bayern also changing coaches this summer in bringing Niko Kovac, the stars could be aligning for James’ return to the Santiago Bernabéu.