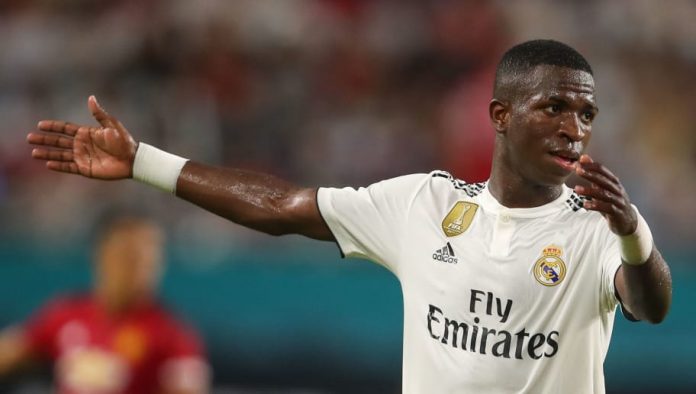 Through all the doom and gloom that’s surrounded Real Madrid in the opening months of the season, there has been one ray of light.

Not the change in coach and not the return of Mariano. Nor the form of any big-name players such as Isco, Gareth Bale or Karim Benzema. Neither the signing of Thibaut Courtois or the news that the Santiago Bernabéu is about to get a shiny new facade.

That ray of light has shone pretty brightly since Real Madrid announced the signing of the Flamengo youngster back in 2017 and while the twinkle-toed forward did not arrive in Madrid until this summer, his ray has only brightened.

Comparisons with Neymar, Robinho and Ronaldinho – certainly in no particular order – have come about. A young Brazilian arriving to play at a top club in La Liga always brings excitement but that excitement has only been heightened thanks to Madrid’s failure to sign any big-name players in recent seasons while clubs such as Barcelona, PSG and Manchester United have been splashing the cash.

Vinicius shone in Madrid’s pre-season tour of the United States but he only started his first official match as a Real Madrid player in Wednesday night’s Copa del Rey victory over Melilla. He didn’t get on the scoresheet but he was Madrid’s star man, providing an assist and causing the home defence problems all night. He also whacked the bar, coming inches away from a goal many believe he deserved.

The 18-year-old has been impressing all season for Castilla, albeit in Segunda B. Fans have been calling on the forward to feature more regularly for the first team and while it’s understandable that Madrid do not want to throw a young kid into the spotlight straight away, it seems the time is now right.

Gareth Bale and Karim Benzema may not be performing as badly as some media organisations like to make out, but they are certainly not tearing up LaLiga as many predicted, especially after the opening weeks of the season. With Mariano also suffering a recent injury that is set to keep him sidelined for a few weeks at least, Madrid should hand Vinicius his opportunity to shine in LaLiga.

It helps that Santiago Solari, the man who has watched over him with Castilla this term, is in temporary control of first team affairs. Julen Lopetegui was cautious with the Brazilian but Solari, aided by his time with the player at Castilla and perhaps pressures from above, is more likely to give him more of an opportunity.

That should come this Saturday and it would be timely. Brazil, and Real Madrid, legend Ronaldo is now owner of Real Valladolid and the forward was also present at Vinicius’ Real Madrid presentation this summer – even taking a selfie which appeared on the official club channels. A hope that the youngster from Flamengo would mirror Ronaldo’s achievements.

Vinicius was superb in midweek and, importantly, he offers something different. Not only physically with his abilities, but mentally. He lifts the crowd and he lifts his teammates. He will offer them a lift when they need it the most.

Already forming a bond with players such as Benzema and Marco Asensio, Vinicius will not be a rabbit in headlights should he be handed a starting role this weekend. He is part of Real Madrid and he is ready to go. It’s often the done thing to protect young players and not throw them into the action, especially in times of desperation, but Vinicius is no ordinary player. He deserves to help Madrid out in their time of need.