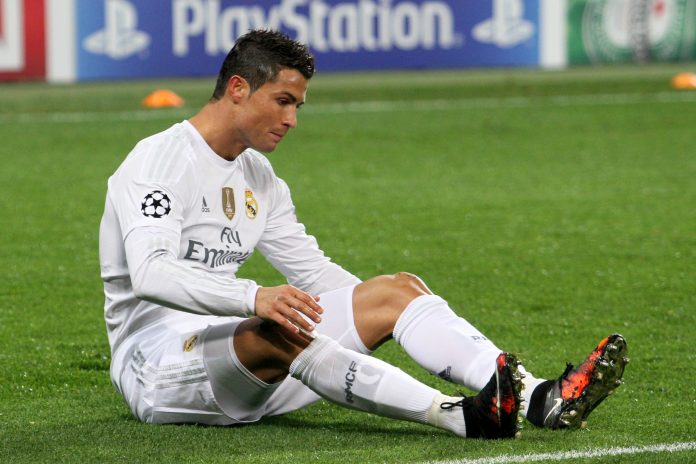 It all started to fall apart when the Spanish tax authority accused Cristiano of not paying his taxes and asked him to hand over 19 million euros to clear his name. Rumors went flying (as they did every year) of his departure because he we offended and outraged that he would be accused for such a thing. The rumors came and went and he stayed another year up until…

No Madridista could forget. In fact, we will all be nothing short of scarred for life when our talisman uttered the words, “It WAS great to play at Real Madrid”, precisely during the Champions League celebration, after wining 3 in a row (4 in 5 years). It was a historic night for all Madridistas and Cristiano opened his big fat mouth and ruined it.

First he couldn’t cope with paying 19 million to the Spanish government and on top of it the Presi did not follow through with a pay hike as he had promised (According to unnamed sources, this is not verified!) Cristiano decided he had had enough and planned for the perfect moment to drop the bomb, to do as much damage as possible and of course, make the moment about him, since it was Bale who was the hero of the night.

Cristiano and Real Madrid were a match made in heaven for Champions League glory. After the initial Real Madrid dominance of the European Cup with 5 victories on the trot 4 titles in 5 years is unheard of. Cristiano came through, big time, on many occasions in several of those Champions League campaigns. He scored numerous hat tricks in knockout stages, several times overturning negative score lines in the first leg, or just through utter domination like putting 5 past Bayern.

As you know by now, yesterday Juventus and Cristiano were eliminated from Champions League play. Cristiano put on a clinic to overturn the first leg against Atleti and go through to the quarterfinal. But his goals weren’t enough to get past a surging Ajax team in great form, who just might take it all this year.

Did Cristiano really think he could keep winning the Champions League at another club? Juventus, as great a club it is, is not Real Madrid. There is no Bale, Kroos, Marcelo, Modric, etc. at Bayern to fill the gaps when Cristiano isn’t on top of his game. What Cristiano and Real Madrid had together was special and historic. Cristiano maybe thought he could lift any team to Champions League glory and Florentino Perez apparently thought he could do without Cristiano, instead of paying the man what he has more than earned.

The president was too proud, too stubborn as was Cristiano. They ruined a great thing. Who knows if they could have struck magic one more time for a 5th title. Cristiano will probably never win another Champions League (although I wouldn’t be against him) and he will certainly never win another Golden Ball. He’s not at Madrid anymore. Now the reality can finally sink it.