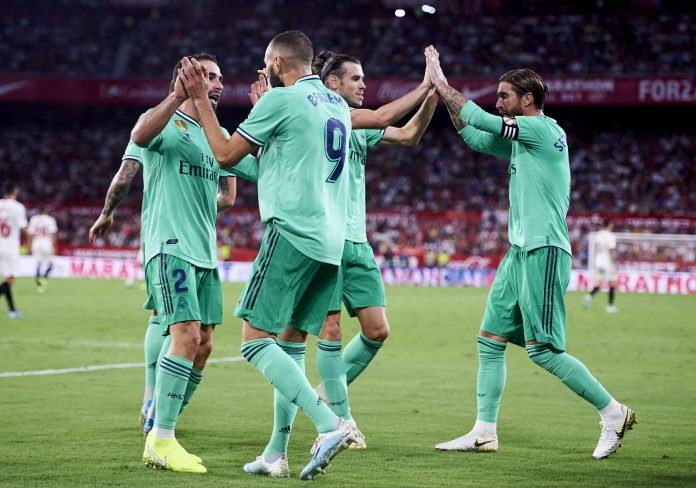 The saying goes that ‘there’s life in the old dog yet’ – and that couldn’t be more opt for Real Madrid at present.

Karim Benzena’s second-half header gave Los Blancos a much-needed and impressive victory over Sevilla on Sunday night to ease the crisis concerns and show the rest of LaLiga that Zinedine Zidane is not done as Madrid coach – not yet.

Madrid were well organised, defensively solid and showed plenty of intensity in their play in Seville, answering the calls of their under-fire coach from arguably his trickiest pre-match press conference yet.

“We know that [intensity] is what is required, as they [Sevilla] are very strong and very fast in transition, the Frenchman said on Saturday.

“We know that we have to be strong and dictate the tempo as much as possible because that’s how we are going to win games.”

That’s exactly what Madrid did and they came away with the three points, not only to ease the pressure on their coach but to show the rest of LaLiga that this year could still be Madrid’s year after an indifferent start.

There’s still a long way to go and Madrid need to back-up this performance and result with more of the same when Osasuna visit the Santiago Bernabéu on Wednesday – but there’s no denying how encouraging the signs were for Sergio Ramos and company.

It was no surprise that Madrid’s improved fortunates came with the return of their captain, too. A man who demands intensity, Ramos led from the front after missing out in the midweek 3-0 defeat in Paris.

Some will say Los Blancos were too defensive but with a team boasting players such as Eden Hazard, an in-form Benzema and Gareth Bale, that trait is not to be sniffed at, especially in a stadium where it is so hard to come away with maximum points.

Well-drilled and well-organised, Madrid often defended in blocks, snuffing out any opportunities Julen Lopetegui’s men looked to create and limiting the hosts to wide crosses and long balls, something that was comfortably dealt with. A clean sheet was a rare positive for a side who have been leaking goals recently.

Madrid looked dangerous in attack, too, despite only finding the back of the net on one occasion. Hazard, Bale and Benzema all had further opportunities that on another day could have ended up in a goal.

There is still work to do done and the proof will be in pudding on Wednesday against Osasuna and, more importantly, against Atletico Madrid in next weekend’s Madrid derby. Maybe, just maybe there’s life in the old dog yet.